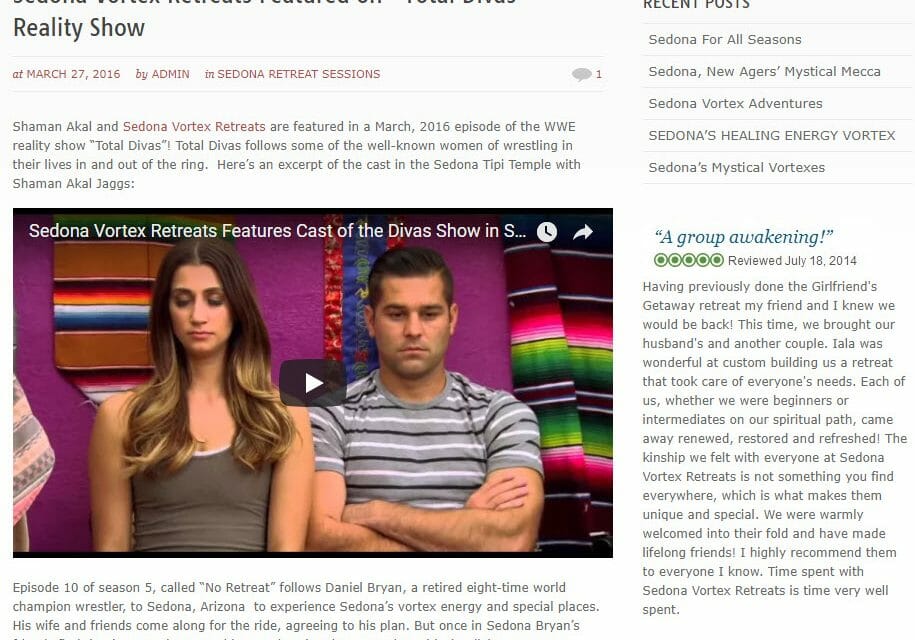 Shaman Akal and Sedona Vortex Retreats are featured in a March, 2016 episode of the WWE reality show “Total Divas”! Total Divas follows some of the well-known women of wrestling in their lives in and out of the ring.  Here’s an excerpt of the cast in the Sedona Tipi Temple with Shaman Akal Jaggs:

Episode 10 of season 5, called “No Retreat” follows Daniel Bryan, a retired eight-time world champion wrestler, to Sedona, Arizona  to experience Sedona’s vortex energy and special places. His wife and friends come along for the ride, agreeing to his plan. But once in Sedona Bryan’s friends find they’re more interested in partying than in connecting with the divine, so Bryan heads off on his own.

Other cast members visiting Sedona in this episode are Bryan’s wife, Brianna Danielson (also known as Brie Bella) and their friends, Stephanie Nicole Colace Garcia, JJ Garcia and Rene Young. The group met with Akal and experienced a sound healing ceremony at the Sedona Tipi Temple and medicine wheel ceremony at the Buddha Medicine Wheel and visited the Amitabha Stupa. The purpose of the ceremonies was to help facilitate access to Sedona’s vortex energies for healing, clarity of vision and spiritual connection. The cast spent several hours with Shaman Akal, but only a portion of the Tipi Temple ceremony made it into the final version of the show. The full episode can be viewed on Hulu with a subscription.